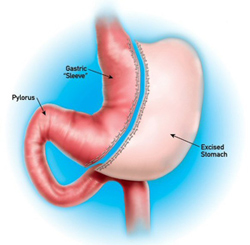 A vertical sleeve is one of a number of names for what is rapidly becoming the gold standard weight loss procedure and the one most often recommended by Michael Feiz, M.D., F.A.C.S. So, what is it? To put it simply, a sleeve gastrectomy, sometimes also referred to as a gastric sleeve, involves the removal of roughly 75%-85% of the stomach. The result is a stomach shaped something like a sleeve.

In order to understand why this procedure has emerged as the best choice for most patients, it’s helpful to understand some of the other bariatric options.

Gastric Bypass – The oldest procedure that is still widely practiced, a gastric bypass literally bypasses much of the digestive tract so that fewer calories (and nutrients) can be absorbed by the body. It also reduces the stomach to roughly the size of an egg. As you might guess, this makes it very difficult for patients to eat more than a little bit at a time. Eating too much, or eating foods too high in concentrated carbohydrates can result in dumping syndrome, which is every bit as unpleasant as it sounds. Because it is the oldest procedure, gastric bypasses have been studied more than other surgeries and its success rate is very high. However, as you can see, it is an extremely radical surgery and patients have to be careful to obtain sufficient nutrition as they lose weight and for the rest of their lives.

Lap Band – A brand name for one of a number of similar banding procedures, Lap Bands have been very attractive to many patients because they are the most minimally invasive procedure, and are also reversible. The procedure involves wrapping a band around the upper portion of the stomach. While it made overeating uncomfortable and helped a lot of patients to lose some weight, it also required a number of follow-up procedures to adjust the band. More importantly, over time an increasing number of patients obtained revision surgeries because they hadn’t lost enough weight.

Sleeve gastrectomies have emerged as the most popular choice in recent years because they are extremely reliable, have few complications, and leave the digestive system essentially intact. This operation removes approximately 75%-85% of the stomach using tiny laparoscopic cameras which allows the surgeon to be extremely precise.

The procedure seems to work especially well because it reduces the appetite in two ways. First, somewhat like a Lap Band, the smaller stomach that is left after a sleeve gastrectomy makes overeating uncomfortable. Second and perhaps even more important, the portion of the stomach that is removed includes an area called the fundus, which is the center of the body’s production of a hormone called ghrelin.

Ghrelin appears to be largely responsible for the hungry feelings that motivate us to eat. Not surprisingly, it appears that people with weight issues produce substantially more of the hormone than more slender people, but it’s actually worse than that. As we begin to lose weight, our bodies “think” that food has become scarce and produce even more ghrelin. If you’ve been wondering why it is that, the longer you stay on a restricted calorie diet, the harder it is to stay on it, ghrelin is very likely a major culprit. Reducing ghrelin means that patients finally have a way to lose weight without being driven to distraction by constant feelings of hunger. 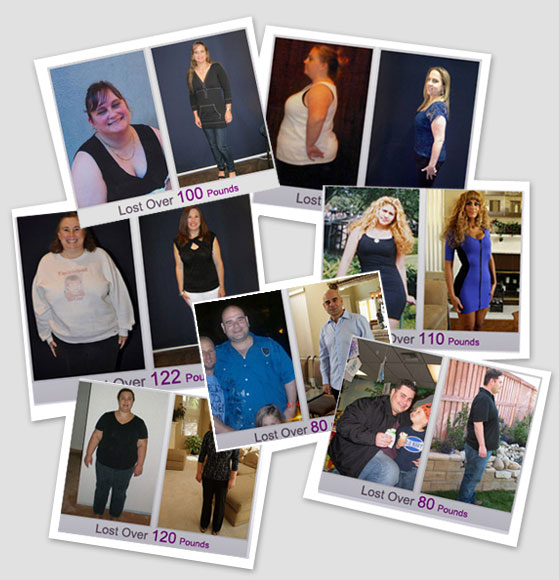 Is a Sleeve Gastrectomy for Me?

If you are considering a weight loss procedure, it’s important to understand that procedures like a sleeve gastrectomy are not a magic wand; they simply make weight loss a lot more achievable by getting at the root cause of the overeating that causes obesity.

Bariatric procedures are generally only recommended for patients with severe obesity. If you are interested in finding out whether a bariatric procedure is right for you, your next step is to schedule a consultation with Dr. Feiz & Associates.

To get started, contact us at the phone number above. You can also reach us electronically via our contact page.